Over the past few weeks, I’ve put a good amount of hours into playing NHL 18. It’s the latest edition in EA Sports’ annual hockey sim franchise, and if you’ve played one of the recent ones, many parts of NHL 18 will be familiar to you. The developers at EA Canada have made some good progress in filling out the game since it’s unacceptably spare launch on PS4 and Xbox One a few years ago, but the game still doesn’t quite live up to its potential as the only console hockey game out there.

One aspect of this review which, in my opinion, reflects an issue with the game’s development is that I play primarily offline. I’ve dabbled in EASHL and HUT over the years, but the high bar for competition makes playing online, at least if you want to do well, demanding in a way that’s reminiscent of hardcore shooters like Call of Duty. You either play a lot, or you get your butt kicked by people who do.

So I play primarily single player, and it’s clear EA can be strained in putting the proper resources to those modes along with a robust online game. The game is much better than it was years ago, but it’s still nowhere near as detailed as more popular franchises like Madden or FIFA. Between an annual release schedule and the need to develop online and offline modes, you can see how it’s difficult for everything to get the love it deserves. 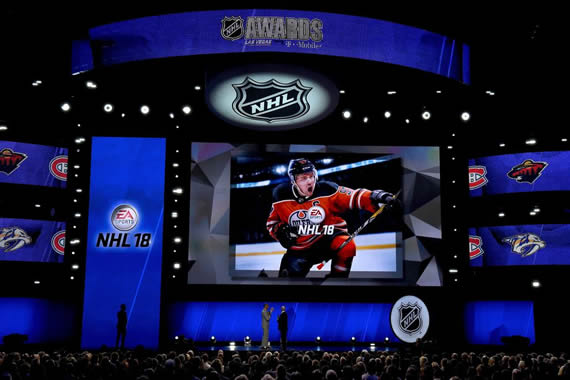 Anyway, those are some broad thoughts on the future of the franchise, but NHL 18 is still a game worth playing if you’re into hockey. Let’s go over some positives and negatives, focusing mainly on single-player stuff.

The gameplay in general feels good

This is the main thing EA Canada nailed from the start of the transition to this generation of consoles, and the game still feels really good. The physics are impressive, the goaltending is much more realistic than older games, and it still captures the speed that differentiates NHL from its FIFA brethren.

They’re not quite perfect, but the effort to make ratings more sensible this year has been a boon for franchise mode. There are way fewer players in the 82-88 range, and that makes elite players stand out in a more realistic way. There’s a wider talent gap in the NHL than the old ratings system had.

This also goes for developing prospects in franchise mode. You can now easily pick players in the top five of the draft who will become superstars in short order, just like we see in the real NHL. That used to be more difficult in the old game, and it was never really clear why certain players would reach their potential while others didn’t. The development system isn’t as good as in Madden’s franchise mode, where your on-field effort directly corresponds to increases in players’ ratings, but developing a team through the draft is much more satisfying in NHL 18 than before.

Also, you can now turn off notifications for your scout asking where to go. You used to have to do this every six weeks in the sim and it was a pain.

Threes is a blast

One of the issues with the game’s move toward hardcore sim gameplay is that it’s made the game less accessible for people who just want to pick up and play. Threes is EA’s solution to that, and it’s a great way to hop into a hockey game with friends who haven’t played NHL in years without skipping a beat. It’s essentially NHL Arcade Mode. It’s good.